Hailing from Lexington, KY, Graveyard Romeos is the premier hard rock band in the area.

The band formed in 2012 as an 80’s hard rock/metal cover band and quickly amassed a large local following, breaking attendance records in several local venues.  Having mainly been in original projects (Patrick is a former member of Shatter Messiah (Mausoleum Records), Steve, formerly of Pownd (Nightmare Records/Sony RED), and Jeff was a touring drummer for Molly Hatchet), it was a natural evolution for the band to eventually begin writing original material.

In early 2018, the band went into the studio and a few months later, emerged with the beginnings of a full length album.  Not wanting to wait for the recording of the remaining songs to be finished, the band decided to release these first 3 songs as an EP entitled, GYR, after the abbreviated name given to them by their fans.

Over the years, the band has had the wonderful opportunity to have shared the stage with bands such as Drowning Pool, Saliva and Saving Abel to name just a few. 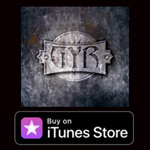 Stream us on Soundcloud